I did the cover for “Photos of the Apocalypse” by Jay Miner (Rust Belt Press). 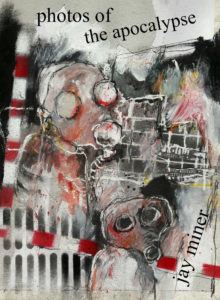 “Photos of the Apocalypse is a drug-fueled bizarro adventure of survival over a vast fictional landscape, mirrored from good ol’ California. A female headbanger, a man by the name of Rhesus Monkey Jesus, a withered Preacher and a Blow-Up Sex Doll witness the end of the world through their drug induced visions and turn to more drugs and lack of survival skills. The unlikely survivors stumble their way across wastelands of fallen cities, buildings and unknown entryways in hopes of seeing the better picture of the Apocalypse.”

“after reading ‘photos of the apocalypse’ i had to check my pill case to see if i’d taken my anti-psychotics. miner rubs out borders while eating handful of acid-soaked sacraments. riffing off revelations in the 21st century. rhesus monkey jesus screeches without anesthetic on the examination table. dr. benway’s evil twin takes a soldering flame to all iron head’s cavities. searching for an archetype that can withstand the tested torture of prying glass eyes. i see machete-wielding hashashins running amok in moroccan streets, bible-belting blood of the lamb chases down altar boys with promises of salvationary bliss, mushroom-shaped shadows stretching already dilated past apocalyptic down yonder, pentacostal snake-handlers do the shimmy of final death throes. jars of white lightning are products of an unclean union. i hear accidentally shot while cleaning their gun to beat the deadly sin of suicidal rap. i’m revelating the mob torching one hundred dollar bills while huffing econoline vans. slab city decays at the speed of thrash-metal home on the range trance muzak. i hear hideous beauties marching to the beat of don’t even think about a different drum. death valley 1969 was disneyland compared to this smoking rubble. is that dune buggies i hear on the horizon?”

“Photos of the Apocalypse is an instant classic of bizarro fiction. This book is a laugh out loud nightmare of depravity, with heaps of cheap sex, drug addled cannibals, a radioactive baby, infanticide, flame thrower wielding orangutans and so, so, so much more. It’s a thrill ride into psychosis the likes of which you have never imagined. I’d take Jay Miner in a knife fight with William S. Burroughs any day of the week and this book is a blade”

Jeff Weddle, winner of the Eudora Welty Prize for Bohemian New Orleans: The Story of the Outsider and Loujon Press